With his Master's thesis "Input of Discrete Numerical Values in Virtual Reality", Dominic Gottwalles won the first junior prize for digitalization in mechanical engineering in the "Master's Thesis" category. The prize was awarded by the Association for Software and Digitization of the German Mechanical Engineering Industry Association (VDMA), which aims to unite mechanical engineering, digitalization and software.

With his supervisors André Zenner and Prof. Dr. Antonio Krüger, as well as the support of the Centigrade GmbH, he has explored the input of numbers in virtual reality and the influence of haptic feedback. He focused primarily on a palm-based numerical input method - without the help of interaction hardware such as controllers.

His goal was to investigate the use of virtual reality in an industrial context, for example when configuring a machine.

During his research, he compared various input methods and paid special attention to the effect of haptic feedback, the impact on immersion, fun, effort, naturalness, user-friendliness, performance and user preferences.

His results showed that an on-hand input (tapping with one hand on the other) is promising for the future, but still needs further research. Currently, he recommends the "in-air-on-controller" method. Here, buttons for numerical input are displayed floating in the virtual space and the user taps with the finger on them. By holding a controller in the non-dominant hand, the user still receives haptic vibration feedback as he inputs numbers.

We congratulate Dominic for the prize and wish him the same success in future projects. 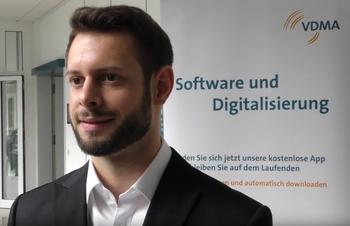 We use necessary cookies to make our site work. We would also like to use additional cookies, similar technologies and third party services to provide useful information to you (such as information about upcoming talks). You can find more information here.